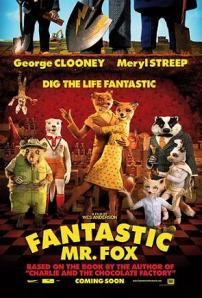 The first thing you notice when watching this movie is the unique use of stop motion animation. The movement of the characters is kind of rocky but not in a distracting way. The jerky movement gives the film a feeling of something homemade and old time stop-motion animation.
I’d be interested to hear a child’s view on this movie because I feel it would be more enjoyable for an adult. This movie is about jealousy and a marriage in peril. Fantastic Mr. Fox seems to be just like any other Wes Anderson movie except for the fact that it revolves around talking animals, it utilizes stop-motion animation, and that swear words are replaced with the word “cuss”. The badger character seems fairly similar to the Kumar Pallana character that has appeared in almost every Wes Anderson movie. And, the scene in which Mr. Fox was debriefing his plan was reminiscent of Bottle Shock.
Fantastic Mr. Fox is quite funny and most of the humor comes from Mr. Fox’s partner in crime, Clive Badger. I found myself laughing out loud quite often throughout the film. I’m curious how children reacted to Wes Anderson’s sense of humor. Some of the jokes probably went over their heads.
The film stars many great voice actors such as George Clooney, Meryl Streep, Jason Swartzman, and Bill Murry. Wes Anderson actually had the actors leave the sound studio and act out their parts to give them a more real sound.
I would highly recommend this movie, it is simply enjoyable. It is humorous, and the colorful stop-motion animation is quite nice to look at.

One thought on “Fantastic Mr. Fox”